The Gamma Knife! – What is it?

The Gama Knife – What is it? 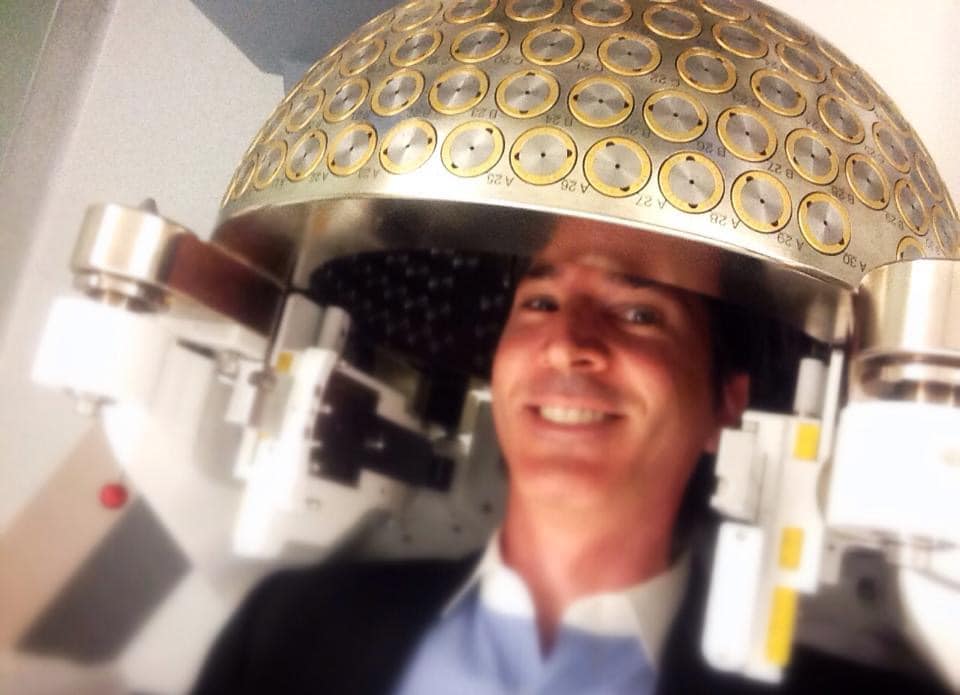 This device is called a “Gamma Knife”, an extremely precise treatment machine designed exclusively for delivering high-dose radiation to tumors, arteriovenous malformations and nerves in the brain.
Requiring no surgical incision to expose the target, the Gamma Knife can destroy deep-seated brain tumors and blood vessel malformations in the head once considered inoperable. It can also eliminate pain conditions and certain movement disorders, as well as silence malfunctioning areas of the brain precisely, to stop seizures—or ease disabling pain problems—that have not responded to other management strategies.
The Gamma Knife contains 192-201 cobalt-60 sources, placed in a circular array in a heavily shielded unit (see my photo). The unit directs gamma radiation very precisely to a target point. Such target points selected in the brain can be placed at the center of the radiation focus, allowing an effective radiation dosage to be delivered in one treatment session. The accuracy of the Gamma Knife is less than 0.3 millimeters, which is about the thickness of a 2-3 pieces of paper. Since the radiation dose falls off outside of the target very steeply (thereby reducing risk of injury to adjacent structures), it is my preferred non-invasive treatment for medication refractory “trigeminal neuralgia”, an excruciatingly painful neurological condition of the face and scalp. The target is called the dorsal root entry zone of the trigeminal cranial nerve, which measures only a few millimeters in size.
Patients with trigeminal neuralgia need to be evaluated by a multi-disciplinary team, including neurology, neurosurgery, neuroradiology and radiation oncology to determine the most appropriate treatment recommendation, which can include drug therapies, surgery to decompress the trigeminal nerve if impinged by an overlying blood vessel, percutaneous rhizotomy (burning of the nerve with glycerol) or radiosurgery.
If you have questions regarding the treatment of trigeminal neuralgia, contact me at the GenesisCare US Northwest Cancer Clinic: 509-987-1800
Published On: March 31st, 2022 / Categories: Brian Lawenda, Cardiovascular Disease, Digital Marketing, Inbound Marketing, Kennewickwa, Pascowa, Prostate Cancer, Richlandwa, Social Media, Tri-Citie Cancer Center / Tags: #BrianLawendakennewick, #cancercareoncology, #cancerdoctor, #oncologytreatments, #outpatientimagecentertricities, #RadiationOncologist, #Specialistcancer, Dr. Lawenda, Kennewickwas, Richlandwa /